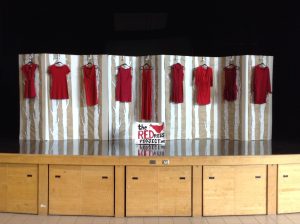 On Oct. 4th Cardinal Carter honoured missing and murdered women across Canada with this display.

It’s based on the work of Jamie Black, A Metis multidisciplinary artist in Winnipeg. In her artwork, she attempts to create a dialogue around social and political events and issues, through provocation or creating space for reflection. She is particularly interested in feminism and Aboriginal social justice, and the possibilities for articulating linkages between and around these movements. (sourced from The Red Dress Project)

Stats Canada notes that from 2001 to 2014 the RCMP concluded that 1,017 aboriginal women had been slain and that another 164 were considered missing. They also noted that the average rate of homicide involving Aboriginal female victims was 6 times higher than that of homicides where female victims were not Aboriginal. (sourced from Stats Canada). However, since the start of the National Inquiry on Missing and Murdered Women, the Minister of Indigenous and Northern Affairs Carolyn Bennett say the number is most likely “way, way higher”.

Across the county on Oct. 4th Sister in Spirit Vigils are held to honour these women.

Some aboriginals believe that red is the only colour spirits can see. The hauntingly empty red dresses hang in public places calling back these women’s spirits to allow them a change to have their voices heard through family members and community.

Many hands went into creating this display including members of Cardinal Carter’s Arts Council, along with both Contemporary Aboriginal Voices English classes. “Those of us who created the cafeteria display hoped that when students saw the dresses they were reminded of the women who are supposed to be in them…but are not”

Thanks to Ms. Dachuck and everyone who helped with this project!